Steve Khan is an artist who is a real person, not a celebrity.  I first heard of Steve Khan as he was introduced with the Brecker Brothers band in 1977. He was the guitarist with the wild hair and moustache who played really fiery solos.  Somehow I missed the first two Columbia albums, but after enjoying Arrows, I soon picked them up also.  I had entered my guitar phase that was heaviest in the early years.  I picked up “Two for the Road” the collaboration between Steve and Larry Coryell and Steve’s liner notes fascinated me.

“More often that not Larry just played stuff on the guitar that I just couldn’t believe, and if it hadn’t been impossible to stop playing, I would have probably stopped and applauded myself! I wondered: “What am I doing on the same stage with this guy? I must be NUTS!” In general, it was a wonderful experience, and it was all too sobering to sit next to someone, who, night after night, hit moments of sheer guitar genius.”

Many musicians have egos that can barely be contained in spacious concert halls but here is a guy who was quite self-effacing and even willing to admit feeling ‘outgunned’.  Yet he’s been named one of the 22 top jazz guitarists worldwide according to Japan’s Jazz Life Magazine.  He has accompanied the very who’s who of singers and music groups including Billy Cobham, Michael Franks, Phoebe Snow, Billy Joel, Steely Dan, Hubert Laws, Aretha Franklin, and James Brown.

Steve and I are both fans of Indianapolis’ jazz guitar great, Wes Montgomery. We also share a birthday and on a whim, I sent him a birthday greeting.  He responded very promply.  He is a real person. I am a fan of his. Therefore, it is my extreme pleasure to present “The Steve Khan Interview” Exclusively on ‘The 6P’

[GH]    Though you have intimated your admiration for most of the players listed below, I want to ask you in a way that gives geographic context:  Here in Indianapolis, jazz fans have their faves, including the great Wes Montgomery, personal favorite, Freddie Hubbard, and Indiana University alums Michael and Randy Brecker. Could you comment on the influence these players have had on you?
[SK]    Wes Montgomery was quite simply one of my most important musical heroes. I met him in Los Angeles during the ’60s, saw him play many, many times, and will always remember how very kind he was to me. Answering my endless questions about his albums, and his life. In every way, he was so very special. I recall seeing him with his brothers, Buddy(Piano) and Monk(El. bass), and in those years, with Billy Hart(Drums) and Alvern Bunn(Conga).    Freddie Hubbard, for me, was also an inspiration in countless ways, but when I think about his immense sound, especially playing a ballad, or his sublime sense of swing, I know for certain that there was no one like him. I can still listen to him play at any time of the day. I used to go hear Freddie’s great quintet in Los Angeles all the time too. In those years, it was pretty much: James Spaulding(Alto Sax & Flute); Kenny Barron or Albert Dailey(Piano); Louis Hayes(Drums); and I recall seeing Junie Booth a lot on Ac. Bass).    Randy and Michael Brecker have been two of the most important figures in my life, personally and musically. The friendships endure to this day, though Michael tragically passed away far, far too soon. I miss hearing him play so much. It seems too easy to say, but Michael remains as one of the great voices of the tenor saxophone. Thank goodness for a wealth of videos that are always up at YouTube. Randy and I stay in touch quite a bit, even if he is constantly traveling. I was so happy to have his presence on both “BORROWED TIME“(2007), and most recently on “SUBTEXT“(2014). Anyone who ever passed through The Brecker Bros. Band has been profoundly influenced by Randy’s brilliant compositions. He set a very high standard for all of us. It was beyond intimidating to try to bring in tunes to that band – because almost none of them could measure-up to any of Randy’s pieces.    And finally, speaking of the great state of Indiana, I can’t do this interview without mentioning my friendship with one of the unique minds in the art field, that of Ned Shaw, who created the very special cover image for “PUBLIC ACCESS“(1989), and also for one of my books, an early songbook. His work is also prominently featured on the homepage for my website. I love Ned’s work and his humorous perspective on life. 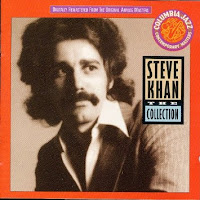 [GH]    The only time I have seen you live was in 1977 when you were with the the Brecker Brothers. We had loved the self-titled album and the group was touring to support the “BACK TO BACK” album. You came to Indy, and opened for Graham Central Station. It was the consensus of our group that you guys stole the show. What was the chemistry like for the group at that time (what do you remember?).
[SK]   I remember those days of touring, and very well. It was so strange for us to be opening for some of the greatest R&B groups from that decade. Graham Central Station, Rufus w/ Chaka Khan, the Ohio Players, and Tower of Power, just to name a few. We were such big fans of those groups, and it was wonderful to meet some of the members. Frankly, we felt like we were getting blown off the stage by all of them. Even within our band there was conflict about the musical direction we were taking – in many ways, fostered by the pushing of Arista president, Clive Davis. In my view, we were always instrumentalists first and foremost, and we should have been playing Randy’s incredible compositions. It was hard to find a middle ground that satisfied everyone. Were we a great Fusion band, or were we going to be a mediocre R&B band? For me, the former was the ONLY choice!!!
To have been part of that family of players: Randy Brecker; Michael Brecker; David Sanborn; Don Grolnick; Will Lee; and Chris Parker was pretty amazing. But to us, as a group, we were just a bunch of guys who had arrived in New York at around the same time, and we had been playing together in one setting or another for all of those years. To this day, I miss and think about Don Grolnick and Michael Brecker every day. They both left so much behind, but I know how much they have added to my life, and in all ways. They were such special musicians, and warm and special people!
Make no mistake about it, we had a ball traveling and playing together on the road. Most of the stories, and there are countless ones to be sure, depending upon which one of us you happen to be speaking with, and on which day – but, 99% of those stories are never to be told in polite company!!! [Smiles & laughs!!!]


This is only part 1! More of the interview is to come; come back later and bring friends!!