Steve Khan is an artist who is a real person, not a celebrity.  I first heard of Steve Khan as he was introduced with the Brecker Brothers band in 1977.  he’s been named one of the 22 top jazz guitarists worldwide according to Japan’s Jazz Life Magazine.  He has accompanied the very who’s who of singers and music groups including Billy Cobham, Michael Franks, Phoebe Snow, Billy Joel, Steely Dan, Hubert Laws, Aretha Franklin, and James Brown. It is my extreme pleasure to present “The Steve Khan Interview”  Part II Exclusively on ‘The 6P’ 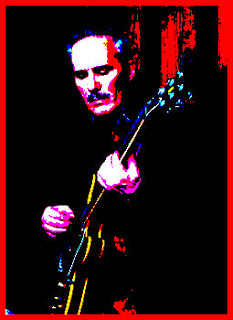 [GH]    Fans always have their favorite artists moments, like watching you play behind Billy Joel on SNL circa 1977, practicing the chord progressions on Uncle Roy (from “CASA LOCO”),  Enjoying your solo on Donald Fagen’s True Companion (1981).  What are some of your great moments?
[SK]    Generally speaking, I don’t find listening to myself, or my own recordings, to be a very pleasurable experience. When you have seen the creative process though, from the idea and conceptual stages, all the way through to having to sit there, and listen to your own recording direct from the mastering studio, and you have to listen to ALL of it without taking a single break in order to make certain that there are no digital errors, skips, technical flaws, etc. – it’s pretty brutal. By that time, you have heard every single detail 1,000s of times. It actually becomes painful for me. Usually, it is impossible to know exactly what you have created – if anything. It can take me months before I can listen to any of it, and hear something remotely positive in my own playing or writing.
However, what I do enjoy, and enjoy immensely are the performances of the other great, great musicians who have been a part of any and all of my albums. Off the top of my head, and this could change at any moment of any day of the week, but here’s a list of some wonderful moments by some of the great, great players who have appeared on my recordings [they are in no particular order, and I had to stop myself from rambling on!]:

[GH]    What’s your practice regimen like? Are there some components you would recommend to less accomplished players? What do you do that keeps it fresh? What determines whether you pick up an acoustic or electric guitar?
[SK]    At this stage of my life, I can’t honestly tell you that I have any specific practice regimen. I go through periods where the impression might be that I had a guitar in my hands for days or weeks – but, that does not always mean that I was actually getting something accomplished. For the longest time, I have been exploring the wondrous keyboard sonorities of Clare Fischer. I’ve learned so much from his work, and continue to work at it and learn from it. It doesn’t mean that it is all totally applicable to the guitar, but one has to dream big – in a harmonic way. It inspires me to want to attempt to create these kinds of lustrous colors with the guitar – even if it is only done by a form of a harmonic magic act.
As for the choice of any one particular guitar as the right “color” for a particular song, or album. My rule of thumb would be to simply do what is right for that song, to always serve the song!!! So if my Gibson 335 is not the right voice for a particular piece of music that I am playing, I will have no problem turning to my Martin MC-28 steel-string, or my Yamaha APX-10N nylon-string. I only use my Strat-type guitars these days as an orchestral colors, overdubbing textures behind certain passages.
Where guitar choices are concerned, for example, when Rob Mounsey and I recorded both “LOCAL COLOR“(1987) and “YOU ARE HERE“(1998), I knew that within the context of the rich sonic textures that Rob can create, either acoustic guitar would be a better voice than any electric one. For me, “YOU ARE HERE” remains as one of the most beautiful recordings that I have ever been a part of. My friendship, musical and personal with Rob has also been a great treasure for me. He is one of the great, great musicians that I have ever known!

[GH]    As a bass player, I know the special energy shared between bassists and guitarists. You’ve worked frequently with Will Lee, who are other players you enjoy working with?
[SK]    Of course, Will Lee and I shared so much together, musically and personally throughout the ’70s. My first 3 albums: “TIGHTROPE“(1977); “THE BLUE MAN“(1978) and “ARROWS“(1979) represented everything that I had worked towards at that point in my musical life, and Will Lee was a HUGE part of all of it. For a time, I would not have wanted to work with another bassist other than Will. In many ways, he taught me the great importance of just “playing the bass” – do your job, make the overall MUSIC feel good, and sound good. It sounds so simple, but the sad truth is that few have truly followed that particular philosophy. Will also taught me to be able to laugh at myself, to see the humor in my own music. One can be most serious about what they choose to do, but sometimes, if you hear something that you’ve written through the eyes and ears of another musician, human being – suddenly the same piece can be so preposterously funny.
Anthony Jackson is probably the most significant bass partnership that I have ever had. However I am viewed, or come to be viewed, I owe so much of that to Anthony, Steve Jordan, and Manolo Badrena for all that we tried to do together between 1982-1985. During that time, we recorded: “EYEWITNESS“(1981); “MODERN TIMES“(1982); and “CASA LOCO“(1983) together, and while creating that music, they taught me so much, and, in the end, they helped to transform me from a guitarist into a music-maker. In truth, that was the greatest gift bestowed upon me. In total, since 1981, Anthony and I have recorded 8 albums together – I treasure each one of them. With Anthony, and any of the great acoustic bassists, music becomes an expression of the art of conversation, where the roles of soloist andaccompanist become blurred, or fuzzy at times. It has been difficult for me to recapture that sense of an ongoing dialogue with other electric bassists. Anthony might refer to himself as a “contrabass guitarist” but, when all is measured, he never forgets that he is playing a bass instrument, and he is always in service of the music!!!
Where recording is concerned, I have had wonderful musical relationships with Ron Carter; John Patitucci; andRubén Rodríguez. All obviously special and unique. During the ’90s when I was trying to hit the road hard, I had the pleasure of having these fantastic bassists as integral parts of my guitar trio concept back then. They were: Jay Anderson; Scott Colley; Drew Gress; and Larry Grenadier. Each one was superb and brought something personal to the book of music. I only wish that we could have done more together.

[GH]     Many of your fans have expressed an appreciation of your collaboration with Jean-Michel Folon. How do the visual arts add value to what you do musically?
[SK]    I had the privilege of first meeting Jean-Michel and his long-time love, Paola, in 1978, after he had done the watercolor image for “TIGHTROPE” the year before. I owe all of this to Columbia Records’ wonderful art director,Paula Scher. She was always so wonderful to me. It was a dream come true for me to have had the artwork of Folon on just that one LP cover. As I sit here today, his images have graced the covers of some 17 of my recordings.
As one who loves the arts, the art of creativity in all its forms, I can find inspiration in just about anything whether, it is music, art, film, and literature. It is so inspiring to be around the work of a creative person, or a creative group of people.

Thanks Steve for being the inspiration you are to so many people,  especially me!