I do blame Miles; I could blame Art Blakey, he was known for having the best new players join his band and he showcased them well.  Freddie Hubbard and Wayne Shorter played with him as well as Chuck Mangione and Cedar Walton.  The real significance and blame was not mentoring and shepherding new jazz stars.  Miles was a jazz icon, that’s true.  But Miles insisted upon always evolving.  If you went to a Miles concert in the 70’s expecting to hear ‘Round Midnight or Seven Steps to Heaven, you were going to be disappointed.  He only once went back to rekindle his famous “Sketches of Spain” album by special request and conducted by Quincy Jones.

Miles loved electric guitar.  He collaborated with Carlos Santana and had planned a collaboration with Jimi Hendrix before Hendrix’s untimely demise.  He wanted to fuse jazz together with rock and in so doing, bring young listeners back to jazz.

My father was a big jazz fan and Miles’ Seven Steps was a favorite.  In 1974 I got my first Miles album, his fusion masterpiece, Big Fun.  I became thoroughly engrossed in digesting the liner notes where the names:  Billy Cobham, John McLaughlin, Michael Henderson, Herbie Hancock, and Chick Corea were proudly displayed.
I discovered through Miles all of these other players.  My regard was not just for Miles and his band, it was for the music.  There are a lot of jazz purists who say ” the fusion music was volume and virtuosity for its own sake.  The fusion was not jazz it was just for show.   I disagree, I will never tire of the second half of Big Fun’s ‘Go Ahead John’ or Herbie Hancock’s Chemical Residue or even the Mahavishnu Orchestra’s Apocalypse done with the London Symphony Orchestra.  Fusion was more than just pyrotechnics, it has a dedicated following even till now as I have heard that Esperanza Spalding’s new project has a distinct fusion sound. 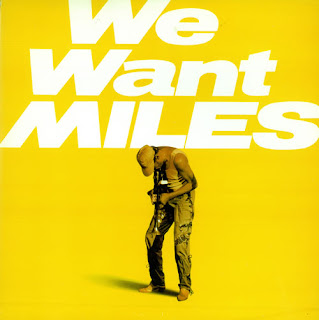