I actually am a fan.  I was a fan after watching the first Despicable Me movie when we happened to stay through the credits and I heard more of the movie’s soundtrack.  The music was light and airy and more r&b than hip-hop, described by music wonks as ‘neo-soul’.  I enjoyed several songs during the movie but as I waited for the name of the music and soundtrack producer, I became acutely aware that this guy has the talent and capacity to be a star in his own right. 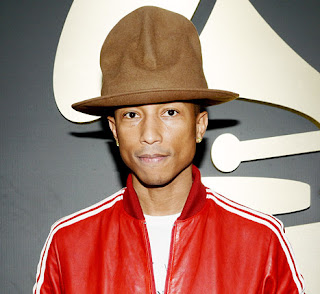 I had heard his name in passing but no one could have guessed how successful his soundtrack to Despicable Me 2 would be.  One of the songs from the sequel: “Happy” would be the biggest selling hit of 2014 with unprecedented sales domestically and internationally.  Due to this success he was asked to join the cast of judges on NBC’s program “the Voice” upgrading his public visibility.
For a time in the summer of 2014, you couldn’t go anywhere without hearing the song played, hence I heard it at swimming pools, restaurants, and clearly places where young people frequent.  I was working at a high school and the song was part of the daily announcements every day.
I believe it was this exposure and saturation of media channels that brought about this conscious and sub-conscious reaction.  Young people of high school age and younger according to my observation, have begun to imitate the vocal pattern of Mr. Pharrell Williams as he appended an “A” to the end of words where “A’s” don’t usually go.  I have conversations with kids or overhear them speaking and it sounds like:  “No-ah, I don’t want to sit down” or “Stop-ah, you’re hurting my leg!”
It seemed like a random fad that I assumed would die down over time, but it didn’t die quickly and now, 2 years later it seems to be contagious.  As many if not more young people and others have been infected with the plague-ah.  There’s really no pattern to it, it’s likely to appear at any time.  And it signals a kind of fad immediacy that has not been seen or equaled previously.
I-ah, refuse to speak that way