This first post related to the Polity is dedicated to the memory of Congresswoman Shirley Chisholm.

I was able to meet Shirley Chisholm when I was in Rockford, Illinois. I was a freshman in college. She was invited to speak at our highly conservative school.  The speaker series must have been quite well funded.  We saw the congresswoman and Milton Friedman during the height of their popularity.
She was the most serious, forthright and gifted woman I have ever met.  She spoke without fear against inequality, racism, classism and gender issues.  There were some somber faces as she described the state of oppression and the responsibility to respond to that oppression.  She was undaunted and assertive.  More than enough to get the attention of the college leadership and community.
She was generous with her time and energy and reached out to us students before she left. She was future-forward in 1975; ready to be President in spite of the fact that the country would take at least another 50 years to catch up.  We may not elect a female president by then either.  We would be ever-so-blessed to be able to find a leader as gifted as she was. 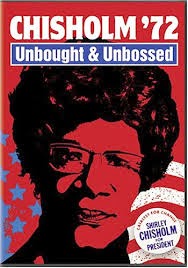 Editor’s note: A late dedication for MLK day 2021 in light of the unheard of circumstances and the strength and grit of Shirley Chisholm.